Edit
watch 02:52
Roblox: DeepWoken - The Loop
Do you like this video?
Play Sound

The Bari Bari no Mi (Barrier-Barrier Fruit) is a Rare Paramecia-type Devil Fruit that gives it's user the ability to generate and manipulate unbreakable see-through barriers at will.

The fruit can be distinguished by its see-through material, blue hue, almost ice-like etchings, and pear shape.

It's well-known for being the only defensive fruit in the game, allowing the player to protect themselves and their allies while boss-fighting or doing dungeons. Additionally, barrier gives an extremely small amount of extra health if you level up devil fruit stats as a bonus. 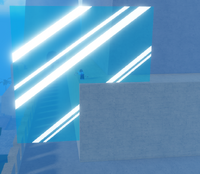 Barrier Crash's wall being half underground.