Edit
watch 02:46
The Quarry - The Loop
Do you like this video?
Play Sound

Crab King Cho is a hard boss that spawns inside Crab Cave in the Desert Kingdom.

The boss has 25,000 HP, however, it passively negates a whopping 50% of all damage, thus bumping it to 50,000. Additionally, when his health is reduced to half or lower, he will start slowly healing.

The Crab King deals 71 M1 damage and also has a huge vertical M1 hitbox. His spawn time is 10 minutes.

His quest's level requirement is 375+.

The boss has a unique gripping animation, in which the Crab King Cho grabs and then devours the defeated player. 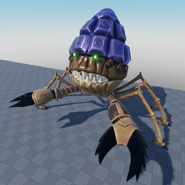 Clear view of the model.