View source
watch 02:53
GTA: The Criminal Enterprises - The Loop
Do you like this video?
Play Sound

The Gomu-Gomu no Mi (Rubber-Rubber Fruit) is a Rare Paramecia-type Devil Fruit that turns the user's body into rubber.

The model is a slightly carved purple sphere-shaped fruit with a brown curly stem. 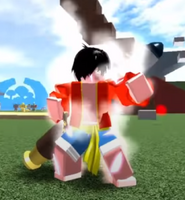