Edit
watch 02:52
Roblox: DeepWoken - The Loop
Do you like this video?
Play Sound

The Kraken is a Sea Beast from the Second Sea that spawns in Rough Waters. The creature is a mythical gigantic squid infamous for destroying sailor ships.

It is less likely to spawn than a normal Sea Serpent, although the difference between the spawn rates is currently unknown. There is no bounty requirement to spawn a Kraken, though it will spawn more often with a bounty of 4,000 or more.

It is recommended to kill it in a small group of two to five people. The beast's health can be rapidly drained by legendary fruits like Magu or Pika. You can also use the style Demon Step if you don't have a fruit.

The Kraken comes in 6 colors, which have different rarities each. From most common to rarest, those are:

It holds the rarest obtainable boss drops as of Update 4.

Traders are advised to check the item's name when trading for an Azure Kraken drop (they can do so by hovering their cursor over it), as many try to fool new players by trading Blue Kraken drops, instead of Azure ones,them being almost identical. 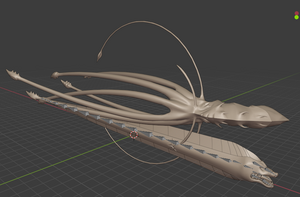 Kraken model along with the Sea King's model.