Edit
watch 02:52
Roblox: DeepWoken - The Loop
Do you like this video?
Play Sound
This page contains content about features that are not yet released.
These features are not currently in Grand Piece Online, but may have been sneak peeked or said to come in a future update.

The Mochi Mochi no Mi (Mochi-Mochi Fruit) is an unreleased Special Paramecia-type Devil Fruit that allows the user to create, control, and transform into sticky mochi at will.

In a public vote between the Nikyu Nikyu no Mi (Paw-Paw Fruit) and the Mochi Mochi no Mi to see which fruit would come first, Mochi won.[3]

As a Special Paramecia-type fruit[4], it may grant the user a "Logia bar", which can be trained to dodge up to 20 non-Haki-infused physical attacks by draining it repeatedly. 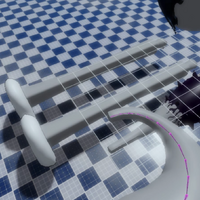